Vector spa and AirBridgeCargo Airlines cooperated in performing a tricky shipment of three cranes from Italy to Bintan Island in Indonesia.

Vector was contacted by his partner who needed to move the cranes from Sicily Island, South of Italy, to Bintan Island by air. Vector, which has more than 40 years of experience in the forwarding business and is always among the TOP 15 Italian air Freight Forwarders, nominated AirBridgeCargo Airlines as partner in this project. The Cranes, having a length of almost 10 meters and a weight of 10 Tons, have been loaded on special platforms specifically engineered by the shipper together with the forwarder and the carrier in order to optimize the space on the cargo hold and minimize possible handling problems.

The cranes and the accessories have been picked up in Trapani province, in Sicily, using 5 trucks which embarked at Palermo port and discharged at Genoa port, for a final arrival at Malpensa Airport where a crane had been booked to offload the cranes from trucks. The cranes were then loaded on AirBridgeCargo Boeing 747 freighters through their cargo nose door dedicated for super long shipment, continued their journey to Moscow and connected to Singapore where they have been offloaded and transported to Singapore port for the final leg of journey to Bintan island by vessel, meeting the deadline of the customer.

Special thanks to AirBridgeCargo Airlines and Vector Personnel for their proficiency, to RG Shipping and ALHA for the cooperation. 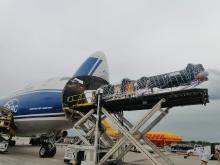 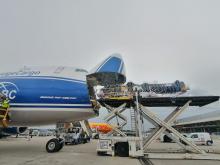 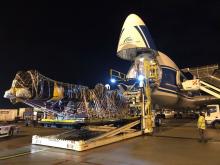 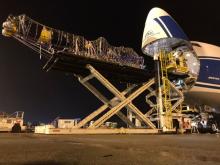 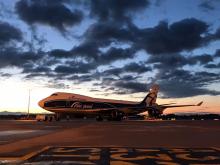